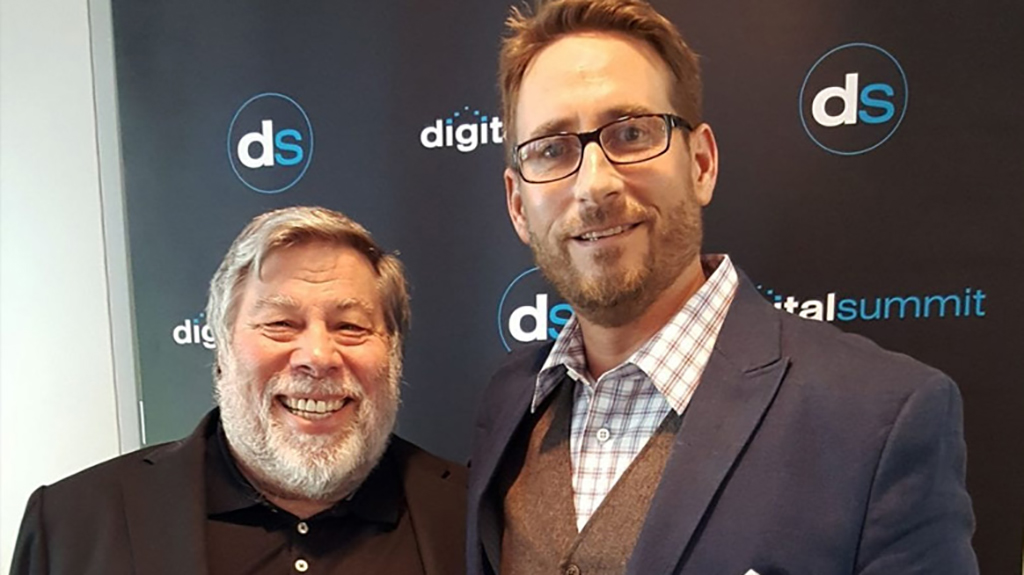 Most people associate Apple with Steve Jobs. And while Jobs was an iconic marketing genius, the real genius was Woz, Steve Wozniak (pictured above, left, of course).

Recently, I spoke at Digital Summit Los Angeles and was asked to also interview Woz. You see, the person who was supposed to interview him had a medical emergency (he’s doing much better now). So, I got a last minute email asking if I could fill in… Um, yeah!

I immediately bought his book iWoz: Computer Geek to Cult Icon. Best move I could have made. First of all, this man has led an amazing life! He is an icon but also very down to earth and even humble. I got this impression from his book, let’s see what the real thing is like.

I literally finished the book as my plane landed in LA. I wrote out some questions that night. But, based on what I’ve heard, I really wasn’t sure how many of these I would even get to.

The next day was the interview. I was a tad nervous. People kept telling me he was difficult to interview because he goes off on tangents and just goes and goes. Who am I to try and wrangle the Woz? That nagging question was running through my mind over and over again.

I did my regular presentation earlier that morning. I think it went well. All I was thinking about was WOZ!

Then the moment came. “He’s here. Come with me to the Bridal Room, that’s where we have him.” I walked in and there he was, sitting with his wife, and excited that we brought him tea.

So, I introduce myself and have a seat. Instantly my fear started slipping away. What a wonderful person he turned out to be. He does talk a lot but the man has things to say!

I asked him a few questions about stories from his book. I told him that his father reminded me very much of my own. We talked a little about old school computers, punch cards, the blue box! I was sitting there just chatting with Steve. (his wife is an amazing woman by the way)

Then, it was off to the main stage. As we walked through the crowd I watched people’s faces light up as they realized that Woz was the guy trying to cut in front of them to keep up with our guide.

We watched from the side as big Mike warmed up the crowd. Then, it was time. I was introduced first to a smattering of applause (expected none really).

After an awkward attempt at an opening shoe joke (the man was sporting some serious kicks), the interview was effortless. Steve has so much to say as he’s been there literally since DAY ONE!

Steve has done so much in his life. Yes, he invented the personal computer. But, he also invented the universal remote! He held two outdoor concerts that were Lollapalooza before there was a Lollapalooza. And he taught fifth graders after he made millions.

I learned so much in reading his book and then actually talking to him. There is so much knowledge in there. Two things stuck with me after my interview with him…

User Experience Is Everything!

Don’t forget about the User in User Experience. Woz invented the first PC, the Apple I. He did this to make computing a better experience for programmers. And the first people he wanted to show it off to were the very users he built it for at the Homebrew Computer Club.

Then he designed and built the Apple II, which was much faster than its predecessor. This is the one that really kicked off the PC revolution.

Yes, Jobs was instrumental in finding people to buy this thing… a lot of people. Apple was a huge success right out of the gates (pun intended). Jobs made that happen.

But it was Woz’s focus on user experience that took Apple from being a money maker to a legitimate game changer. Nothing has been the same since. It was Woz’s obsession with doing more with less that led to PCs that anyone could own. Some of the original Apple II computers still work today!

Remember, computers were mammoth machines that ran on tape drives and were programmed with punch cards. Not exactly something you could do in your den at home.

Woz was the one that made computing small and portable. He was also the one who gave the computer a monitor and keyboard for programming. Things we completely take for granted now did not exist before Woz!

User experience was an obsession with Woz. It was this obsession that drove him to innovate. He was driven to always improve the computing experience. But, then the committee got involved in the design process.

Case in point, the Apple III. This was supposed to be the IBM killer. This version of the Apple computer was designed by a committee of sales and marketing. They lost their laser focus on UX and worried too much about checking boxes against the competition.

The Apple III was a failure. It didn’t perform as well as the Apple II because it was designed by committee and not by people obsessed with UX. UX isn’t just a buzzword. It’s the secret to success!

The other takeaway from my Woz experience was the importance and value of education. Woz was always curious. In his book he tells stories about science projects in elementary and junior high school. According to Woz, this was a time when science was cool. Science projects were celebrated, and it was a big deal to win an award.

We could use more of this today. We talk about STEM and getting kids excited about math and science. Woz’s approach is to let the kids be curious. Let them get excited about a problem they want to solve. Then, give them the space they need to work it out.

We could use more of this in business today too. Companies need to be curious. We need to employ more creative thinkers. Let these creative thinkers have the time and space to develop new solutions to common problems.

In my opinion, innovation is a truly American value. Some of the most ubiquitous tech in the world today started as an idea right in our own backyard… PCs, the Internet, smartphones, IoT, AI, and more.

Woz says that engineers are artists. They create something out of nothing. Engineering is design. Engineering is creative thinking and problem solving. Yes, we should teach kids the fundamentals. But, we should give them the opportunity to think about things on their terms, to get creative in ways that work for them.

In business, I think we’ve lost sight of the art of innovation. We spend so much time checking all the boxes… is this a revenue generator? Does it meet investor expectations?

Woz says “I don’t think anything really revolutionary has even been invented by committee. Because the committee would never agree on it!”

Woz believes that we need to remain curious and teachable. Education is a lifelong endeavor. We never stop learning. That’s certainly a core value at Wood Street. We encourage our team to always be curious. Ask questions. Seek knowledge.

I celebrate the computer nerds, the introverted artist, the creatives of this world. America could use some more Wozzes today. I consider myself truly fortunate to have had this time with Woz. It was enlightening!

Founded in 2002, Wood Street has built a reputation of consistently dedicating itself to outstanding web design and development, as well as quality customer service. Through these core principles we have been able to acquire top-notch design, development and marketing talent as well as ally ourselves with some of the area’s leading experts in the industry.